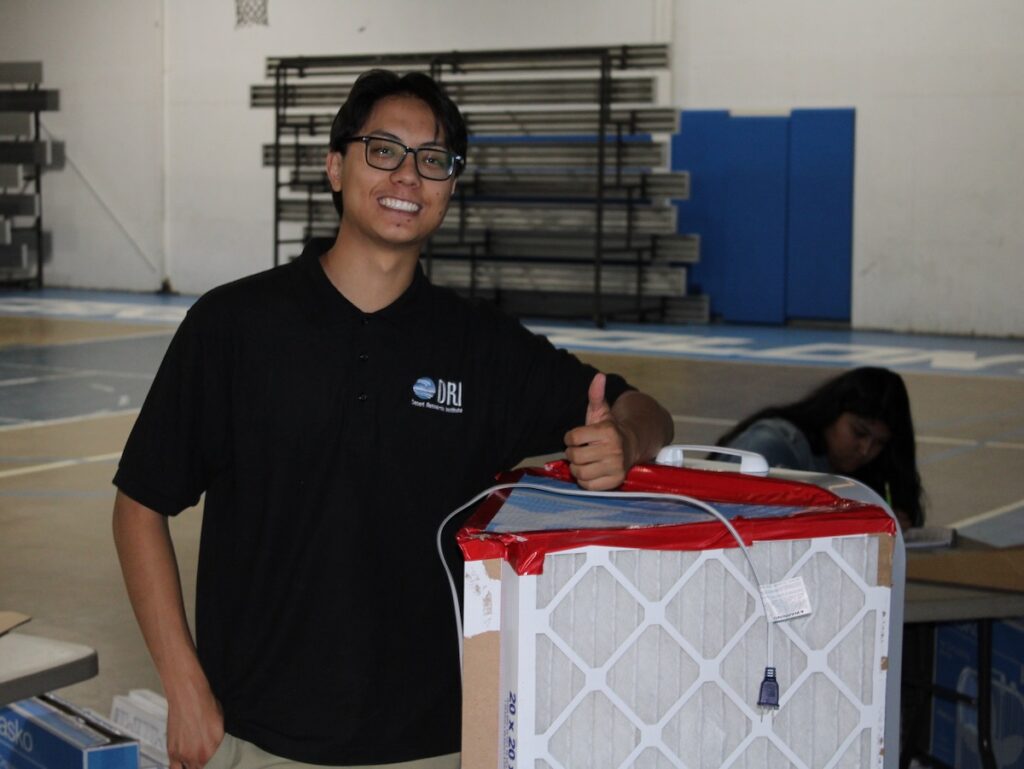 Wildfires affect all in their way, from the places burned as fuel to the areas filled with smoke. Across the western U.S., climate change is leading to warmer, drier conditions and contributing to longer, more active fire seasons. In the Great Basin and other parts of the western U.S., indoor air filtration during wildfire season has become a problem. Many houses have no particulate filtration systems, and this is especially true on reservations. Possible solutions can be expensive and materials can be hard to obtain, but Piercen Nguyen and his colleagues Meghan Collins and Jade Nguyen of DRI have a proven solution.

Piercen Nguyen, DRI workshop intern and member of Enterprise Rancheria, Estom Yumeka Maidu Tribe, is a student at the University of Nevada, Reno, and became interested in the health impacts of wildfire smoke while working on a project for the Center for Genomic Medicine at DRI in Reno, Nev. Studying lung cell damage from prolonged episodes of wildfire smoke, he saw the physical effects of smoke on lung tissue.

According to Nguyen, the standard way of studying lung tissue involves using liquid smoke extracts introduced to the tissue. However, the team at DRI took a more realistic approach by “generating wildfire smoke and pumping it directly into an exposure chamber containing lung tissues,” Nguyen said.

Nguyen explains that they found that a type of cancer cell seemed to be resilient to wildfire smoke. They also found that wildfire smoke from different geographic areas has unique consequences on lung cell functions. This research had him thinking about the effects of smoke on communities. Back home in California, Nguyen’s community has been damaged by fires in the past, and his community members have been exposed to fire smoke heavily over time. People who rely on evaporative cooling systems have had to choose between overheating or breathing clean air, Nguyen said. Working with this project and seeing the effects of smoke on lung tissue sparked the idea to develop a usable solution for these communities.

Fire is an issue that hits very close to home for Nguyen. “There are tribal members, who have lost homes like, one person in my tribe lost their home twice to wildfires,” Nguyen said.

A problem made worse by climate change

In the western U.S., fire has always been a part of life, but decades of fire suppression have led to unhealthy fuel buildups, and changes in climate such as increased drought and heat are contributing to longer and more active fire seasons. These effects of climate change touch the whole region. Wildfire smoke is harsh and dangerous for communities even if a fire is not threatening them. Communities have an exacerbated problem of poor air quality in these times, and some people need extra air filtration equipment for their homes.

Tools like the AirNow map show the dangers of fire and smoke in real-time. And regions like Northern Nevada have issues with fire danger and pollution from larger fires in Western areas. Recently the danger of this smoke has grown and stayed hazardous during summer and fall.

As seen in the graphics below, EPA air quality data from the summer and fall seasons of 2020 and 2021 in the Reno and Douglas County areas of Nevada show PM 2.5 reached “moderate” to “hazardous” levels for longer than any other period on record. PM2.5 is particulate matter that is less than 2.5 micrometers in diameter and is generated by various sources including wildfire smoke.

Tribal housing infrastructure is very susceptible to issues like wildfire and smoke. Standing buildings are usually old designs that can have issues like lead paint and toxic flooring. They can be manufactured homes or trailers that are long past expected use. Elements like extreme cold and heat waves are an issue throughout the Great Basin, but many reservation homes are only equipped with woodfire stoves for heating, and swamp coolers, window units, or nothing for cooling.

On the Stewart colony of the Washoe Tribe of Nevada and California, most homes have nothing or swamp coolers for cooling air.

Using only low-cost materials that are easily found at a home improvement store like Home Depot, Nguyen learned how to make a simple air filtration system alongside the swamp coolers that were built into many reservation homes.

The do-it-yourself (DIY) filter system has been around a while, Nguyen remarked. The type of system he learned to build has been shown to be both effective and safe by the U.S. EPA {US, 2022, Research on DIY Air Cleaners to Reduce Wildfire Smoke Indoors}. The cost is under $50 and uses a box fan, cardboard, tape, and two air filters.

This design was made and chosen for keeping cost and complexity low. We also talked about manufactured air purifiers. Nguyen said most will work for smoke, just one must research the filter and have money for the cost.

The price and availability of air filters are major issues for rural Tribal Communities, due to the distance many people would need to travel to buy supplies and the economics of the areas. This means many communities are staying at risk of wildfire smoke (and wildfires themselves).

For the last year, the researchers have been doing workshops on different reservations in Northern Nevada and Northern California to teach people how to build low-cost filtration systems for their homes. They received a grant in May of 2022 from the DRI Lander Endowment that allows them to provide the materials to these communities for free. So far, they have held 10 workshops that have helped 93 people build their own air filter systems.

In this workshop, DRI researchers provided materials to make a DIY air filter that utilized two filters to make a wedge shape. However, Nguyen adds that in a pinch, you can simply use a single filter fastened to a box fan and still get effective results. He adds that for safety reasons, it is crucial to use a box fan built in 2012 or later as manufacturer safety regulations have since been updated.

Watching a workshop at the Washoe Tribe’s Community Center at Carson Colony on September 15, 2022, the process was very easy.

Nguyen showed the group how to build an air filter using a box fan, a decent size cardboard sheet cut from the fan’s box (~1.5ft. on each side), two MERV 13 filters, and a few yards of Duct Tape or similar brand of tape. Triangular pieces were cut from the cardboard, and then all was assembled. So simple that personal touches were naturally added: showing the graphic from the box or not; what tape color, and where the cable should come out for their house.

Whether you live in a house, apartment, or another type of housing, if your home does have an air filtration system, it is important to know that filter quality is important. Filters are labeled by particles filtered: one is weakest, and 20 is strongest. The EPA recommends a better filter for filtering out smoke. However, you cannot just add thicker filters to your wall AC unit or central air system because that could damage the system. Additionally, two other rating systems are commonly used to classify filter quality: MPR and FPR. In these cases, it is recommended to use FPR 10 or MPR 1500 or better.

Filters work physically collecting certain size particulates, and filtration systems are designed for specific filter sizes. When we inspected the filters in our homes, Nguyen and I both found that our filters were the weakest possible – like looking through a sheet of paper — and probably not helping effectively during fire season.

There are a few different filter types available. HEPA filters are the gold standard and can remove most smoke particulates. However, availability can be an issue even in large population centers. Nguyen explained that during periods of heavy smoke, places like Home Depot run out and he has had to try and order cases that are on backorder.

Air filters also need to be replaced regularly. According to Nguyen, they should be replaced every three to six months, or possibly more often during periods of heavy smoke. He recommends checking air filters every month during fire season, and potentially replacing them monthly if you notice a visual change such as discoloration from the particulates being filtered.

“People have had an overwhelmingly positive response to the workshops,” Nguyen said. He added that several people expressed their excitement to use the DIY air purifiers to improve the air quality for both themselves and loved ones who may experience conditions like asthma or COPD. Workshop attendees also remarked to Nguyen and colleagues how helpful the DIY air purifiers were in combating hazardous downwind air quality resulting from the Northern California Mosquito wildfire event in the months of September and October 2022.

Robin Smuda is a Wašiw person and a member of the Washoe Tribe of Nevada and California. Currently, they are a reporter intern with Native Climate at DRI and studying Cultural Anthropology at the University of Nevada, Reno. Robin is planning on studying Ethno-Archeology and Indigenous Studies in grad school, with a focus on the transition from pre- and post-contact in the Great Basin.